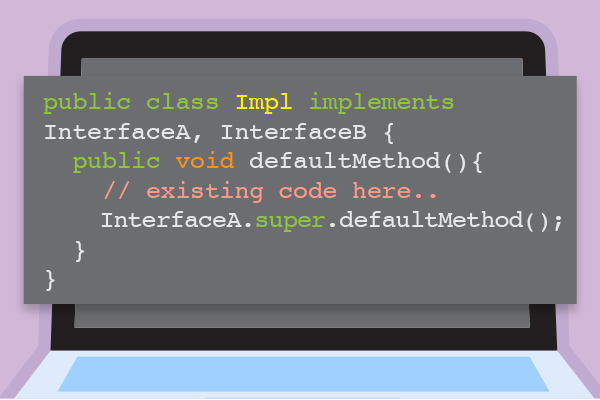 How to Use Default Methods in Java 8

The most obvious use case for Java 8 lambdas is to apply a lambda to every element of a collection.

So it’d be really frustrating if we couldn't use lambdas with the standard collections library since backwards compatibility can’t be sacrificed.

Due to the problem described above, a new concept was introduced. Virtual extension methods, or, as they are often called, defender methods, can be added to interfaces providing a default implementation of the declared behavior.

Simply speaking, interfaces in Java can implement methods. The benefit that default methods bring is that it’s possible to add a new default method to the interface and it doesn't break the implementations.

In my opinion, it doesn't seem to be the language feature that would be appropriate to use every day, but it seems to be essential for Java Collections API update to be able to use lambdas naturally.

The most trivial example

Let's start with the simplest example possible: an interface A, and a class Clazz that implements interface A.

The code compiles even though Clazz does not implement method foo(). Method foo() default implementation is now provided by interface A. And the client code that users the example:

One common question that people ask about default methods: "What if the class implements two interfaces and both those interfaces define a default method with the same signature?" Let's use the previous example to illustrate this situation:

This code fails to compile with the following result:

java: class Clazz inherits unrelated defaults for foo() from types A and B

To fix that, in Clazz, we have to resolve it manually by overriding the conflicting method:

But what if we would like to call the default implementation of method foo() from interface A instead of implementing our own. It is possible to refer to refer to A#foo() as follows:

Now I'm not quite sure that I like the final solution. Maybe it would be more elegant to specify the default method implementation in the signature, as it was specified in the first drafts of the default methods specification:

I guess there could be a lot of arguments for and against this way of resolving the conflicts but it seems that the creators just decided to accept the necessary evil.

The real examples of the default method implementations can be found in the early builds of JDK8. Going back to the example of forEach method for collections, we can find its default implementation in java.lang.Iterable interface:

The forEach method takes java.util.function.Consumer functional interface type as a parameter which enables us to pass in a lambda or a method reference as follows:

Let's take a look on how the default methods are actually invoked.

In case of the default methods conflict resolution, when we override the default method and would like to delegate the invocation to one of the interfaces the invokespecial is inferred as we would call the implementation specifically:

Here's the javap output: public void foo(); Code: 0: aload_0 1: invokespecial #2 // InterfaceMethod A.foo:()V 4: return As you can see, invokespecial instruction is used to invoke the interface methodfoo(). This is also something new from the bytecode point of view as previously you would only invoke methods via super that points to a class (parent class), and not to an interface.

Default methods are an interesting addition to the Java language--you can think of them as a bridge between lambdas and JDK libraries. The primary goal of default methods is to enable an evolution of standard JDK interfaces and provide a smooth experience when we finally start using lambdas in Java 8.

If you're developing in Java, skip time-consuming rebuilds and redeploys during development! JRebel lets you avoid the time spent reproducing the pre-change application state after a redeploy. See how much you can accelerate development with a free, 14-day trial of JRebel.