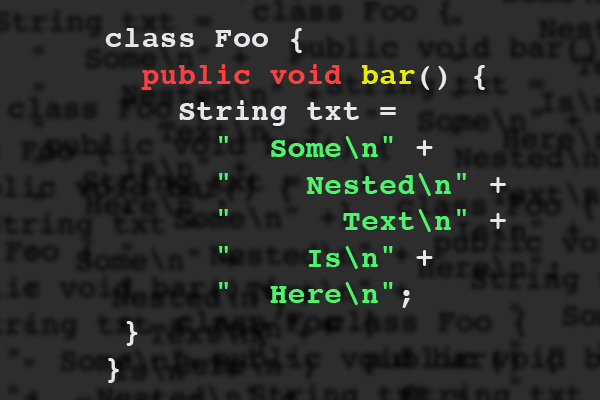 In this article, we look at the origins of text blocks, changes through JEP 355 and JEP 368, and how developers can start planning for text blocks with their introduction to the language starting in Java 15. But first, how did we get here?

What Are Text Blocks?

The text blocks preview feature began as work on the (now deprecated) JDK Enhancement Proposal 326: raw string literals, and has culminated in a target standard feature release with JEP 378 targeted for Java 15.

Raw string literals were to be introduced in JDK 12 as exploratory preview feature under JEP 326. It added raw string literals to Java to help developers avoid escapes – a common issue when writing strings. In December of 2018, the proposal was withdrawn due to feedback from the community. They pointed to issues with the backslash being too lightweight typographically, and the “any number of quotes” rule being counter to a tool-friendly philosophy – among other feedback.

In 2019, JEP 355 added a more concrete vision for how Raw String Literals will work in Java, including considerations for formatting, readability, and decreasing the frequency and necessity of escape sequences.

After a successful second preview period, JEP 378: Text blocks have now been targeted as a standard feature for Java 15.

As mentioned above, the biggest feature of JEP 355: Text Blocks is the ability to use multi-line string literals in Java. This is a feature that is currently available with most programming languages and that Java has caught up with this release. Another important consideration in JEP 355 is the effort to make inline multi-line Strings more readable. Because of that, text blocks eliminate the need to concatenate multiple strings together, escape nested quotation marks, or include newline markers.

Because text blocks exist in addition to string literals, the development team needed a way to visually separate text blocks and string literals. They chose the fat delimiters """, with the opening delimiter followed by a line terminators, as shown in the below example.

In instances where the line terminator isn’t required at the end of a string, the closing delimiter can appear in line on the closing line.

In the example above, we see that the least spaced line sets the indent. So, the code:

Would be equivalent to:

When you remove two spaces from in front of the closing delimiter, you see the indent decrease two spaces across the text block.

So for the code:

Would then be equivalent to:

The \ <line-terminator> escape sequence is used to explicitly suppress the insertion of a new line character. In the example provided in JEP 368, we see how a string, which has been concatenated into substrings, is then wrapped onto separate lines.

The \s escape sequence translates to a single space – which isn't processed until after incidental white space is stripped. This example provided in JEP 368 shows how that may be used:

Another nice feature for text blocks involves a readability improvement for concatenation inside a text block. Instead of making developers leave long, awkward segments of white space between lines, they instead recommend developers to use the String methods replace and format, or the new instance method formatted.

The new String instance methods included with Text Blocks in JDK 13 are (marked as deprecated until it’s out of preview):

If you want to learn more about text blocks, and how or where to best use them, I recommend reading “The Programmer’s Guide to Text Blocks” by Jim Laskey and Stuart Marks. If you’re looking for additional information on the JDK 13 preview language features, I recently published a blog on switch expressions, here. Lastly, if you want to see a recorded demonstration of some of the examples I covered here and in the other article, you can watch my preview language features webinar here.

Looking for further reading? Check out our articles on the proposed changes under JEP 359 and JEP 370.

If you want to learn more about JEPs and how they impact Java, be sure to check out our resource hub, Exploring New Features in Java.

Lastly, we recently launched JRebel 2019.2.0, which fully supports JDK 13 – including use of text blocks and switch expressions. You can try it out free for 10 days by clicking the link.