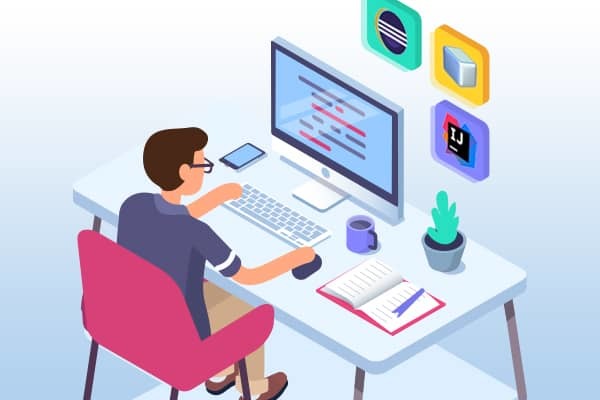 IDEs, or Integrated Development Environments, are an application that provides a set of tools for developers to write software. While developers do not need IDEs to create software, it makes life a lot easier — especially for Java developers.

If you are a novice Java developer searching for an IDE to kickstart your career with, or a seasoned programmer looking to add to your stack, you've come to the right place. We've ranked the three best Java IDEs based on popularity, ease of use, cost, and more.

Ranking the best Java IDEs is difficult, especially when it comes to crowning the out and out top choice. The two top choices for Java developers are typically IntelliJ IDEA and Eclipse, with industry usage typically skewing toward IntelliJ IDEA.

In our most recent Java Developer Productivity Report, respondents reported their IDE usage as follows:

Adoption, of course, is typically a good way to judge the quality of available offerings – but depending on the audience you ask, the percentage of developers using one, or another IDE will vary. And in the case of our rankings, we don’t perfectly align with overall popularity of the IDE.

Because IntelliJ IDEA and Eclipse are so comparable in terms of overall benefit, we used popularity to break the tie. With that in mind, our list of the 3 best Java IDEs to use in 2022 runs as follows:

IntelliJ IDEA is the most popular Java IDE in use today. It’s full-featured, meaning it has a long list of productivity-enhancing features that make it a must-have for many Java developers. Many of those features, like code completion, are highly customizable, and can be tuned to fit the needs of the individual developer.

It’s also highly extensible, and sports a large marketplace for libraries and plugins (including JRebel).

JetBrains also offers free licenses to students and teachers, to open source projects, and for classroom use at the university, college, and school levels. They also offer discounts for non-profits, former student users, and startups.

Many of the features in IntelliJ IDEA lend themselves to beginners. But these features are also highly customizable, meaning IntelliJ IDEA can be a popular choice among beginners and experts alike.

IntelliJ IDEA is relatively expensive, so that cost can be prohibitive to small teams with limited budgets.

As mentioned earlier, the top two spots for our best Java IDEs list is basically a toss-up. That’s because Eclipse, like IntelliJ IDEA, is a mature, fully-featured IDE that dramatically improves the development experience. The key differentiators between the two products are mainly centered around usability/learning curve, and price. Because IntelliJ IDEA Community doesn’t have the full functionality of IntelliJ IDEA Ultimate, and Eclipse is closer to IntelliJ IDEA in terms of functionality, the comparison between the free products falls in favor of Eclipse. However, Eclipse is considered much harder to learn and use than IntelliJ IDEA, meaning it can be difficult for beginner developers.

As mentioned above, Eclipse is free for use within the enterprise. For developers who want to improve their development output without the price tag, it’s the top option.

Eclipse IDE is popular among experienced developers and is more suitable than other IDEs for large-scale projects. But, because it has a steep learning curve, it can be harder for beginner developers to ramp up to full productivity with it.

NetBeans is another free IDE used in Java development. While not as well-adopted as Eclipse or IntelliJ IDEA, it does have a small, dedicated following from generally experienced developers.

Like IntelliJ and Eclipse, NetBeans allows users to extend its functionality by adding modules. One of the advantages of NetBeans is that it’s part of the Apache ecosystem, meaning built in Apache Maven functionality for users.

Maven-Native: Since Maven is the default build tool within NetBeans, it doesn’t require an install, and doesn’t require installations to local Maven repositories. Lightweight: NetBeans is lightweight, but still offers solid functionality out of the box. Extensible: NetBeans is fairly extensible, offering a number of plugins that can help extend functionality of the IDE (including JRebel).

NetBeans is open source, and free for private and commercial use following the Apache License 2.0.

Developers who want to develop natively with Maven will want to strongly consider NetBeans. It’s slightly easier to use than Eclipse, so it’s also a good choice for beginner developers who don’t have the budget for IntelliJ IDEA.

We only had three spots available for this blog, but there are a few other Java IDEs worth mentioning.

For Java developers working fully within the Oracle ecosystem, JDeveloper is a viable choice. It integrates directly with Oracle ADF, and can be used throughout the full development lifecycle.

Visual Studio is another popular IDE that didn't make our top three -- but it could easily have bumped off NetBeans for the #3 spot.  It sports similar productivity features to IntelliJ IDEA, and offers a polished developer experience that meshes well within the Microsoft ecosystem.

BlueJ, like NetBeans, has a small, dedicated following among Java developers. It’s easy to use, but offers far less functionality and extensibility than NetBeans, Eclipse, or IntelliJ IDEA.

Choosing the best Java IDE can be a tough decision. But as outlined above, IntelliJ IDEA, Eclipse, and NetBeans IDEs each have their own advantages for Java developers. Aliging those benefits with your needs will help make your choice a success.

Try JRebel for FREE on Your IDE

Experience the time savings of JRebel on your favorite IDE via our plugins for IntelliJ IDEA, Eclipse, NetBeans, JDeveloper, MyEclipse, and Rational Application Developer.