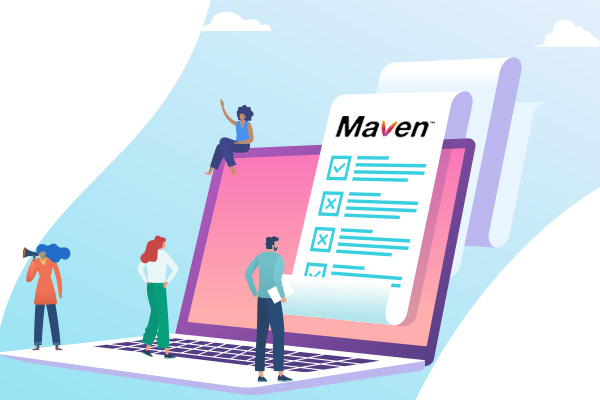 In this article, we continue our series of one-page cheat sheets for Java developers. This time we’ll look at Maven, the most popular Java build tool and dependency manager! Almost everyone uses it, many hate it, some complain about the verbosity of the xml configuration and its inflexibility, some praise the inflexibility so their teammates have a harder time messing up the build for everyone.

In any case, knowing Maven is a must have skill for any respected Java developer, and with our MVN cheat sheet, you can have some of the most important and frequently needed information at a glance. But if you want to dig in on Maven, including a closer look at how to create a project in Maven, and the commands and plugins that can help make your project a success, be sure to read the rest of the article as well as our What Is Maven? blog. Don't worry, we've linked to the cheat sheet at the end of the page.

The complexity of using Maven comes from the fact that it tries to do multiple things at the same time. First of all it needs to describe the project, its structure, submodules, the necessary build steps and so on. Then it needs a mechanism to provide the information about what other libraries are required for the project to build. Then it has to actually assemble the project, run the tests and perhaps even push it out to your artifact repository.

Creating a Project in MVN

Let's start with the first task Maven can accomplish for you. Often the projects get created by an IDE wizard, or by cloning a template from Github, or using a generator, like JHipster for the Spring Boot Angular projects. However, the template functionality is baked into Maven itself. Maven templates are called archetypes. And one can use them to kickstart a working Maven project. For example if you execute the following command:

Maven will obtain a list of all available to it archetypes, ask you for some configuration, and generate a working project. If, for example you select the maven-archetype-quickstart archetype, you'll get the following project structure.

Let's talk about the main infrastructural components involved in Maven. Maven itself is a binary on your machine. In the internet there's a central repository that stores and distributes all available artifacts, both the dependencies and the plugins for Maven. You can configure your own remote repositories, but in a nutshell, all that sits in the cloud.

For performance purposes and so you don’t download the internet every time you invoke Maven commands, Maven caches everything that it downloads in a local repository. Think of it as a cache, if something is not yet in the local repository, but is required to execute a command, Maven checks the remote repositories.

The local repository typically resides in the ~/.m2 directory. This directory also stores the Maven configuration in the form of the settings.xml file. You can use it to configure the remote repositories, credentials to access them, and so on.

MVN command execution is separated into phases. They form the lifecycle of the build.

A Maven Build Command is Declarative

The instructions of what to execute during every phase are detailed in plugins. Maven is a declarative build system, which means that you say what your Maven build command should accomplish, but don't say what exactly to execute. For example, you can configure the build to use a maven-compiler-plugin to compile the Java sources, but you don't tell Maven when to run it.

Which Version of Java Do Developers Use Most?

Besides understanding what Maven lifecycle is or what plugins are available, you can also remember a list of command line Maven options that can simplify or speed up your work with Maven. Here is a list of a few Maven command line options that we think are relevant to almost anyone.

What Is a Maven Option?

These Maven plugins are good ones to keep in your toolkit:

Help plugin is used to get relative information about a project or the system. Think of it as the man pages of Maven. Here are a couple of MVN command types that you can play with.

Dependency plugin -- provides the capability to manipulate and inspect the dependencies.

Compiler plugin, not surprisingly, compiles your java code. It's pretty self-explanatory, but this one you'll configure again and again to comply with a modern Java versions. Set language level with the following configuration:

Wrapper plugin is an easy way to ensure a user of your Maven build has everything that is necessary. It will generate a couple of shell scripts that can download a specific Maven version, so you'll have reproducible builds. It is also useful to bake in some configuration, like the remote repositories declaration into the maven archive. Then the wrapper will ensure that you get the correct configuration out of the box.

There's also a Spring Boot plugin which compiles your Spring Boot app and builds an executable fat jar. It comes with a more sensible configuration that the compiler plugin's default. Pretty handy.

The last, but not least in our list is the Exec plugin. The exec plugin is used to execute Java commands as the part of your build process. If you need to achieve something for which you don't have a plugin yet, you can substitute it with an invocation of the exec plugin.

In this post, we looked at the some of the Maven vocabulary: repositories, dependencies, and so on, plugins that you can find useful, and some command line options to make your life with Maven easier. The best thing is that all that information is neatly organized on a single A4 page cheat sheet that you can print out and have handy for when you find yourself explaining how Maven works to a less experienced colleague once again. Or when you find yourself googling how to configure the compiler plugin to build a Java 8 plugin. Or just because it's colorful and packs useful information. Be sure to grab your copy!

If you're working in Maven, you've probably scribbled some commands on a piece of paper and taped it to your wall. Now, we're not ones to judge — we've been there — but we think you can do better. Our Maven Options Cheat Sheet covers the need-to-know MVN options, and does it on a one-page PDF. Download a copy today by clicking the button below. 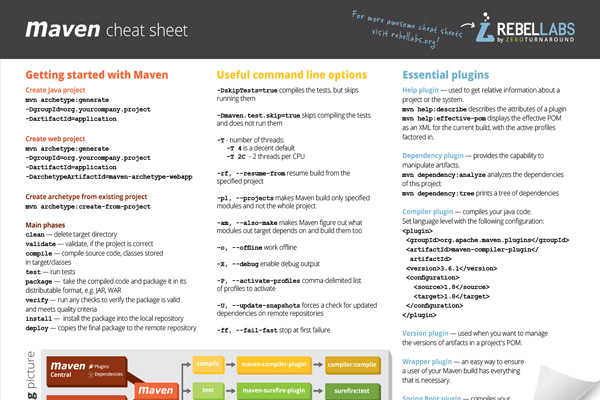 Last year we explored some of the topics that are universally used in software development and so we have quite a library of useful Java cheat sheets to please your sight and remind of the commands and options developers often forget and google.

And many more. You can see all of them on our cheat sheets page.

How Many Developers Use Maven in 2021?

Check out the report today by clicking the button below.

How Much Time Can JRebel Save You?

The answer might shock you. Find out with a free 14-day JRebel trial!