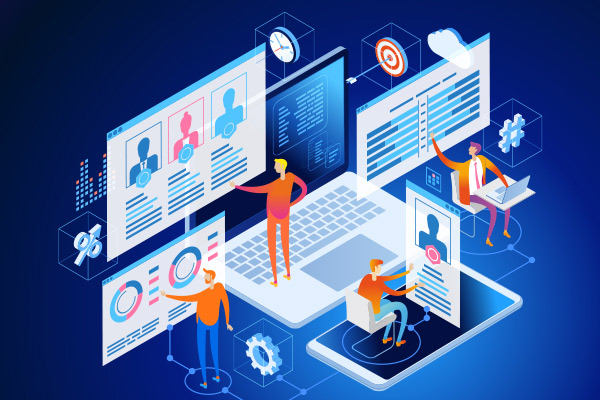 In this blog, we look at the considerations development teams need to make before transitioning to microservices, two deployment patterns, and why the change is more than just a shift in architecture.

What Is a Monolith Application Architecture?

To summarize, a monolith is the traditional application architectural style where all aspects and features of an application live in the same system.

This has historically been a popular route because it’s easy to get up and running; however, it also comes with many challenges, especially for DevOps. Since all elements share the same space, you’re locked into one technology, bugs impact the entire application, and small changes require restarting the entire application.

What Is the Microservices Application Architecture?

Microservices are an application architecture defined by loosely-coupled services, where different features of the application live separately.

This structure is desirable because it gives developers the freedom to use different technologies and languages, and because each service focuses on a single capability, you can release software updates more frequently and develop and deploy different features simultaneously. However, microservices also increase troubleshooting challenges, as it’s difficult to track data and move code from one service to another.

Looking to move from a monolith to microservices in your Java application? You’ve got two options: either start from scratch with a Big Bang, or use a method known as the Strangler Pattern.

Starting from scratch means you are recreating the existing application with a blank slate, an approach that takes longer and comes with higher risk and uncertainty. In fact, many have failed in deploying microservices this way, as it requires total restructuring of your team and operations. Additionally, you won’t be able to use the new system until it’s complete, and the legacy application often gets neglected in the meantime. So, unless you are confident in your team’s ability and flexibility, we advise you to avoid this route.

The Strangler Pattern is a popular choice for deploying microservices in Java, replacing a program’s functionality step by step. Once the new feature is finished, it is put into use, and the old feature is “strangled.” We recommend this route, as it delivers value much faster. However, it requires a strategic approach in order to be executed efficiently.

The Strangler Pattern for Deploying Microservices

Don’t dive into the waters blindly when starting the microservices deployment process. As with any organizational change, a strategic process is required to ensure everything runs as smoothly as possible. Before moving forward with the Strangler Pattern, establish a game plan that includes these three steps:

1. Get Executive Buy-in for Deploying Microservices

Be realistic with yourself and your team that the move to microservices will be disruptive. Without executive support and sponsorship, this transition will fail, so you’ve got to sell the story internally. Consider why you have decided to make this move (improvements in ability, agility, and time to market) and how it will benefit not just your development team, but the organization as a whole — then communicate that to leadership.

It’s not just the technology that’s moving from one application to many; it’s the teams and people who work on the move. Different members of the team should be assigned to separate, specific services. Additionally, some will need to work on the transition while others continue working to maintain the legacy application. Take individual personalities into account and what environment they will most likely thrive to determine who should be where. Keep in mind: The team structure must be part of the initial plan and process and not done as an afterthought, or things could become chaotic.

DevOps is a concept where a developer interacts directly with the software infrastructure, ultimately requiring fewer Operations staff, increasing agility, and saving money. While Java apps in a monolith structure have a straightforward deployment process — one app, therefore one process — microservices require a much more complex procedure and flow. Since you’ll be integrating the old with the new and deploying both together, you need to build consistency and develop a set of best practices.

Where to Start When Deploying Microservices in Java

So which tasks should you move first? Start with a small, low-risk component that will provide insight before moving to larger, more complex features. The component you transition first should also be one with frequent business requirement changes and is deployed regularly. When the new service is complete, A/B test it against the monolith for a period of time. Running both parallel can be costly, but it also builds trust with your site viewers as you incrementally develop and test.

Making the switch to microservices from a monolith is far easier when you have the right tools. The biggest concern for microservice developers is in finding tools that both fit their application needs and offer long-term stability and support. The list below gives a brief overview of a few popular Java Microservices deployment tools that fulfill those needs.

Related Reading: Find out what the top Java tools of 2021 are in the Java Developer Productivity Report.

Using microservices has many benefits, but that doesn’t mean it’s the right choice for everyone. While microservices in Java simplify development, other elements like your infrastructure and team become far more complicated. Assess your existing application and development process to determine whether the transition makes sense. If you decide to move forward, do so slowly but surely. A “big bang” approach starting from scratch will only end in a major (and costly) headache; build confidence internally with a step-by-step approach via the Strangler Pattern.

If you want additional information on deploying microservices in Java, be sure to check out this webinar from Perforce CTO, Rod Cope.

Want to further improve your microservices Java application development? JRebel speeds up the process by eliminating the need for costly and time-consuming redeploys. Request your free trial today.