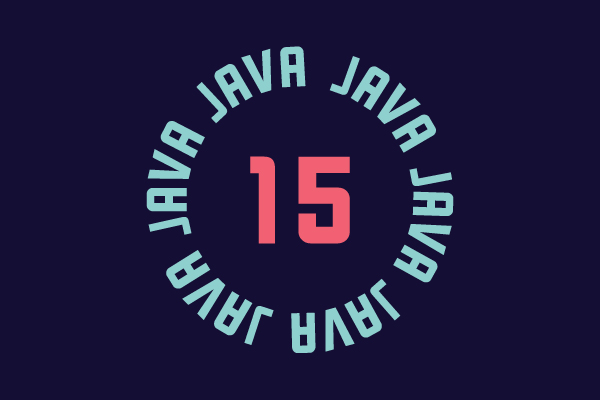 Java 15 marks an important feature release in the build-up to Java 17, and offers some exciting new features, preview features, and incubator features for the JDK.

In this article, we look at the details surrounding Java 15, including release dates, features, and adoption projections.

Java 15, or JDK 15, is the reference implementation of version 15 of the Java SE Platform.

Java 15 is scheduled for public release on September 15th, 2020. Important dates for the release schedule are included below.

OpenJDK 15 is a non-long-term support version and will be supported for a total of six months, with LTS scheduled to end in March of 2021.

Those plans may change if the community decides to change course on their current default support period. And, of course, companies like Azul will presumably continue to provide paid LTS services for non LTS OpenJDK versions.

Java 15 features include notable additions and subtractions to Java, including the continued enablement of pattern matching features as outlined in Project Amber. Notable deprecations include the removal of the Nashorn JavaScript Engine.

Lastly, JEP 358: Helpful NullPointerException will now be set by default (instead of requiring you to enable it manually).

Arguably the biggest language feature for JDK 15 is the preview addition of sealed classes, which help developers to precisely outline available subtypes while laying the groundwork for further pattern matching improvements.

A sealed class or interface can be extended or implemented only by those classes and interfaces permitted to do so.

As an example, imagine a simple calculator, allowing you to do basic mathematical expression of adding, subtracting, dividing and multiplying. Using a sealed class, a developer could declare a BinaryExpression interface, and explicitly permit only those four implementations.

Knowing exactly which subtypes exists can simplify code, in that you know you can never get an unknown type – no need for a catch-all else block, or the default section in a switch; the latter will be important for Pattern Matching in the future, where for sealed classes the javac compiler can detect if the switch is exhaustive. Likewise, for serialization of data to formats with schemas, such as xml, you know all possible subtypes are supported in your format.

Hidden classes are another important, albeit hidden, addition for Java 15. While hidden classes aren’t something the average Java developer will interact with directly, Java framework developers, or anybody working with proxies,or other dynamically created at runtime will likely be using hidden classes. The key function of hidden classes is that they create classes that “cannot be used directly by the bytecode of other classes.”

The concept of hidden classes already exists in the form of JVM anonymous classes (not to be confused with anonymous inner classes in the source code). This JEP introduces a supported API for defining such classes; something that previously could only be done via Unsafe.

JEP 384 marks the second preview period for the Java records feature. First introduced under JEP 359, records propose an easier, clearer way to write data aggregate classes. One of the big benefits of the records language feature, as we explore in our article on records in Java, is that it helps to eliminate the need for assessing the meaning and intent of boilerplate code.

The biggest change in the second preview compared to the first, is the disallowance of this in the constructor, enforcing the "auto initialized" idiom of the record’s compact constructor. JEP 384 also serves more as an extended review period for Java users.

The second preview clarifies and corrects some issues with the specification, but otherwise is equivalent to the spec of the first preview. Additional planned pattern matching features include those for switch expressions and statements.

The Nashorn JavaScript Engine was added in JDK 8, as a potential replacement to the Rhino scripting engine, as part of a push to support more dynamic languages in the JVM. But with the introduction of GraalVM, the focus for multi-language support has moved there. Nashorn was first marked for removal in Java 11, but has been part of the JDK through JDK 14. This isn’t a particularly impactful change, but is important for the separation it signals.

Other Features in Java 15

While the Java 15 features we talked about above may be more important to the big Java picture, the rest of the features and deprecations slated for Java 15 are worth mentioning

Of these remaining Java 15 features, the two most interesting are the ZGC and Shenandoah garbage collectors, which are interesting specifically because they went from experimental to fully-realized features so quickly. Sheandoah is even more interesting because it won’t be a part of the Oracle Java SE 15 distribution.

Java 15 is a fairly big release in terms of impactful features. With many of the features backed by big names in Java, we expect many of these preview and incubatory features to become solidified full features before Java 17.

But, in terms of adoption, we don’t foresee Java 15 becoming a runaway success. For most teams, leveraging these features only to migrate six months later isn’t worth the time or money. The real question is how much these features will impact adoption of the next LTS version, Java 17.

If you want to learn more about OpenJDK, Java, and the JEPs that gradually shape the language, we have a number of great resources worth reading and watching.

Take Full Advantage of the Latest Java Versions With JRebel

We work to ensure JRebel are always compatible with the latest Java release. Want to see how JRebel can help you save time during development by skipping redeploys? You can try it free for 10 days via the link below.