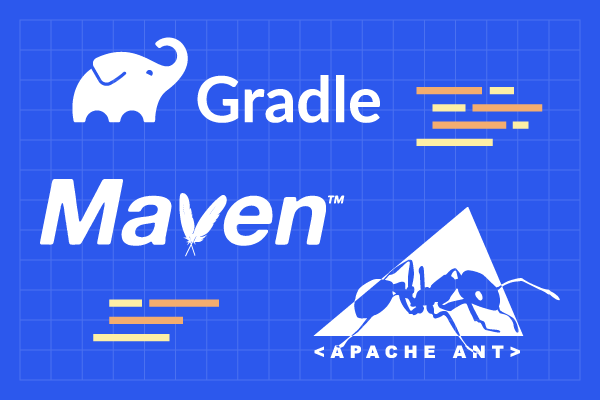 According to the 2021 Java Developer Productivity Report, the majority of Java developers reported using Maven as their main build tool, at 67% of respondents. In a distant second and third place were Gradle at 20% of respondents and Ant at 11%.

These three build tools have consistently ranked in the top three build tools for Java developers. In this article we compare Maven, Gradle, and Ant, looking at the benefits and drawbacks of all three to see why developers overwhelmingly use these tools.

Apache Maven is a powerful software project management tool used in the Java development environment to manage and build projects as well as to maintain dependencies. Maven uses an XML (pom.xml) for project configuration.

Nonetheless, the learning curve for Maven isn’t terrible and after a couple hours of reading in parallel with writing your build script, you’ll do enough trial and error to get started.

Gradle is a modern automation tool used in software development for project build automation. Gradle has its own domain-specific language (DSL) based on a Groovy (build.gradle) or Kotlin (build.gradle.kts) code.

Apache Ant is the predecessor of Apache Maven. First released in 2000, Ant was developed as a replacement for a build tool Make, which was used widely in software development in the past. Using an XML file, Ant is used to automatize build tasks. But, without the addition of the Apache Ivy plugin, Ant doesn’t support dependency management.

Starting to learn Ant isn’t too difficult if you have experience with build tools, dependency management, and XML. The most difficult part is maintaining and expanding your build script as your project grows in size and complexity. However, as Ant is one of the older build tools, newer tools such as Gradle or Maven are a better starting place for novice developers.

Ranking Maven vs Gradle vs Ant

To properly compare Maven, Gradle, and Ant, our developers ran a series of builds on each. Here are the results of their tests.

Gradle wins here based on its extreme simplicity, readability, and customizability. Maven received especially low scores mainly due to its strict conventions and invisible rules. Ant is slightly better at letting you make all kinds of customizations, but the boilerplate and verbosity doesn’t make things simpler in that sense.

Maven wins this category, since it’s quite simple to create a plugin yourself in case the hundreds of other plugins available don’t satisfy your needs. Ant is similar to Maven in this way, although using your own plugins is a bit more complex. With Gradle, plugin customizations are very simple—you can even write them directly into the build script and share them among your team.

Gradle wins here, mainly because of the positive user experience and vibrant (albeit small) community. Maven and Ant do not compare on either level, although a long history and large community of current/past users can be a valuable resource.

Development environments vary from developer to developer so it’s important that Java build tools support and integrate with the IDEs and continuous integration servers developers interact with on a daily basis.

Overall, we give this category to Maven. When it comes to integration and feature support with IDEs, app servers, and CI servers, Maven supports everything under the sun.

Maven vs Gradle vs Ant: Which Is Best For You?

In the end, our developers decided that Gradle performed the strongest out of the three tested build tools, with Maven in a close second. Therefore, we recommend starting with Gradle if you have never used a build tool before due to the low barrier to entry and its simplicity. We do not recommend switching to one or the other if you are currently using a build tool. Each tool has unique properties that may be better or worse depending on your end goal.

Larger enterprises seem to be using Maven more often than not; Maven has become the de facto build tool as it steadily gained ground over the competition. On the other hand, Gradle can be helpful for hobby developers or open source developers.

Still deciding on a Java build tool? Or want to simply explore a build tool more in-depth? Check out the following articles to learn more:

If you're already using one of the tools and it's working for you, then the benefits of switching to something else are probably not very significant. You should have a very good reason to migrate, and in the end it’s probably better to stick with what you know.

JRebel works seamlessly with all top Java build tools. To see how JRebel works with your stack, start a free 14-day trial.

*Note: This blog was originally published on August 21, 2014 and has since been updated for accuracy and comprehensiveness.