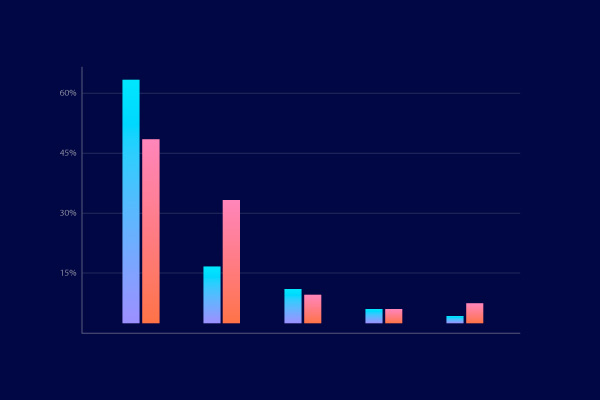 In our Java Tools & Technologies Landscape for 2014, over 2000 developers told us a bit about what JVM technologies they use and which tools are interesting to them.

So we wanted to do the same with IDEs, but realized that we had so much awesome data that we needed to continue to break it down into separate tool segments from there!

So why does it make sense to segment by IDE?

These factors lead us to believe that you can potentially learn something about developers based on the IDE they use (or choose). What we’ve done is extracted data for each IDE users and compared it to the average using Microsoft Excel pivot tables. What we are seeing is how a specific IDE users compare to the entire survey population, and seeing if anything significant can be seen. Let’s get into it, starting with Build Tools…

Looking for the latest info on Java IDE usage? Our 2020 Java Developer Productivity Report looks at the most-used IDEs, build tools, frameworks, application servers, and more. Download a free copy today by clicking the link below.

Given the deep integration and love-hate relationship between users of different IDEs and build tools, we thought about starting here and covering Eclipse, IntelliJ IDEA and NetBeans, which comfortably take up over 90% of the IDE market. Other tools, like Spring Tools Suite, MyEclipse, IBM RAD, JBoss Dev Studio, vi/vim, emacs, etc didn’t make up significant portions of the overall community, so to make things simpler we didn’t cover them at this time.

As the most commonly-used IDE at 48% (when increases to 55% when including distributions like Spring Tool Suite, MyEclipse and JBoss Dev Studio), we expect Eclipse statistics to more or less mirror the average. However, we can see a few differences when compared to the entire survey population. Most noticeable are:

Our survey distinguished between IntelliJ IDEA Community Edition (free) and IntelliJ IDEA Ultimate Edition ($$$), and for the sake of the graphics we combined the weighted scores for both versions. IntelliJ IDEA is the fastest growing IDE in the market, and according to 49% of respondents, the "most interesting" IDE available. Here is what we see here:

NetBeans remains in a stable third place in the market, using its proximity to Java and Oracle to its advantage when possible, most recently in the same-day launch of NetBeans 8 to fully support Java 8, and continued easy integration with GlassFish as the reference implementation for Java EE 7. Here's what we see when it comes to NetBeans users:

Eclipse users significantly favor Ant (+ Ivy), where usage is highest among all IDE users, and Maven is aligned with the average. But Eclipse developers are less likely to use alternative build tools like Gradle and SBT. This indicates to me that Eclipse represents the vast majority of legacy enterprise projects out there.

IntelliJ IDEA developers use Ant (+ Ivy) about half as much as the average, Maven is consistent and usage of newer alternative build tools like Gradle and SBT is nearly double the average. They are also the most likely developers to use any one of the build tools out there. This implies that IntelliJ IDEA users are more cutting edge and less willing to use legacy tools in favor of alternative solutions.

Ant (+ Ivy) and Maven usage among NetBeans developers is slightly higher than the average, which explains the lower numbers for Gradle or SBT. NetBeans users are more likely to ditch the build tool entirely than any other IDE users. This indicates to me that regardless of what NetBeans projects are up to, they need less tooling than other devs (because they got mad skills?).

Give JRebel a test spin with a free 10-day trial, or see how much you can save by calculating your ROI first.

Java Basics: What Is Gradle?