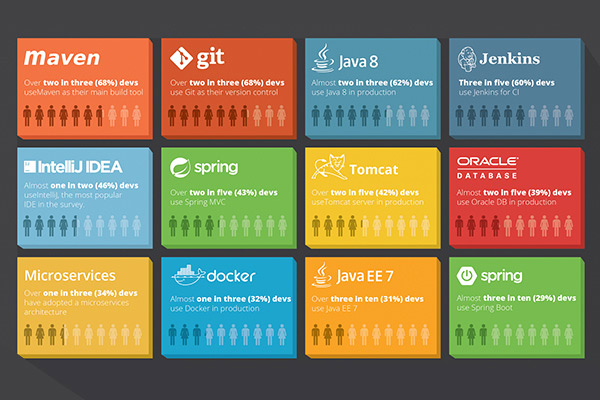 We recently released the RebelLabs Java Tools and Technology report 2016. In case you missed it, we showed you the survey results from over 2000 fellow geeks. There were winners and losers in the report, but in this post, we’re going to focus on the best Java technologies of 2016. First of all, here’s an image that shows 12 winners from the report that we were excited to tell you about. In a sense these are the best tools and the best Java frameworks the community uses.

Looking for the latest info on Java technologies? Our 2021 Java Developer Productivity Report looks at the most-used IDEs, build tools, frameworks, application servers, and more. Download a free copy today by clicking the link below.

Let’s go through a few of these most popular Java frameworks to look at why they’re so significant.

The build tool many love to hate, but it provides us with a crucial service we all depend on. Many expected Gradle to bite away at Maven’s dominance, but the numbers show quite the opposite. Not only did Gradle fail to grow significantly, Maven actually grew market share from previous years. In actual fact, it looks like Maven and Gradle are just sharing new users from the sinking Ant-ship. The extent of the domination can be seen in the following graph, figure 3.4 from the trends section of our report, that shows build tool adoption over the last four years:

It’s always fascinating to see the rate of Java version adoption and with the arrival of Java 8 which brings many interesting new features and candy for developers, we would expect the adoption rate to be high. The question focused purely on the main application in the respondent’s production environment, so we’re not talking about a proof of concept application that nobody cares about. 62% of respondents use Java 8 in production, a dominant lead over older versions.

Finally after all this time, we can say that IntelliJ takes the lead in the flamewar of IDEs. Eclipse’s usage has seemingly decreased over the past four years with a considerable 21% drop in usage of the tool. That’s one in three eclipse users in 2012, no longer using the IDE today. IntelliJ IDEA on the other hand has almost doubled its share in the past four years, jumping up 22%. That’s an overall swing from Eclipse to IntelliJ of 43%.

The majority of Java EE users are on the newest version, Java EE 7. This is great news for the Java EE teams, however this year’s data is significant for other reasons as well. The percentage of developers not using Java EE increased to 42%. That’s an overall increase of 10% which is pretty worrying over a period of just 2 years. Additionally, 3% of developers are working on J2EE, a 13 year old technology. Let’s put that into more context. 7% of Java EE users (almost one in ten) are stuck on J2EE.

Last, but by no means least we look at Spring Boot, which some say is the best Java frameworks for web applications. Since it's v1.0 release in 2014, Spring Boot has already joined Spring MVC in dominating the web framework landscape. With almost three in ten already using Spring Boot, it’s fast becoming the go to option for Spring users as well as those contemplating a microservices architecture. In fact, of those who do state they use a microservices architecture, an impressive 48% use Spring Boot. This is quite telling and significant so early on in the microservices era. We should mention Spring MVC too really, as it’s growing a few percent each year among our respondents and holds it’s rightful place in top spot of the web framework table.

There’s also there’s a beautiful pdf you can download which has all the information as a handy document for you to flick through at your leisure!