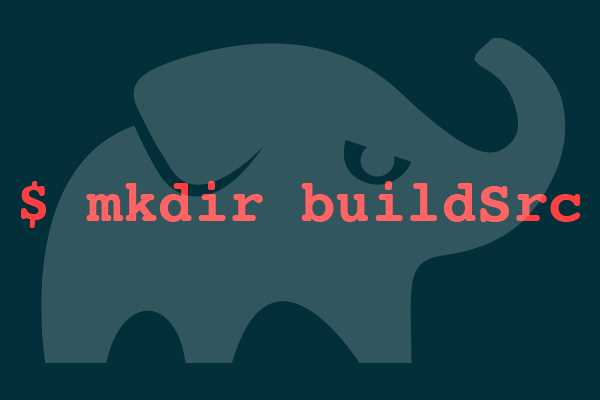 If somebody asked about the Gradle feature that everybody should know about, I would probably point them towards buildSrc. It is a magic Gradle Java/Groovy project inside your repository, available as a library to all of your build.gradle files.

This approach allows you to write custom logic in Gradle builds, using your favorite JVM language. As a bonus, you can also cover trickier parts of your build logic with unit tests!

In our Gradle buildSrc tutorial today, I'll be talking about how to create a Gradle buildSrc project, create custom tasks and how to turn those buildSrc Gradle tasks into full-blown plugins. As an added bonus, I'll also talk about how to manage dependencies when using Gradle and buildSrc. Let's get started!

How Popular Is Gradle?

Find out how many developers are using Gradle in 2021 and how it compares to other build tools. Download the 2021 Java Developer Productivity Report to learn more.

Getting started is easy! Let us create a folder named buildSrc in the root folder of your project (the same folder that contains your settings.gradle):

The project will automatically have both the java and groovy plugins applied to it. We can simply create a standard src/main/java folder and start writing code.

Now we can re-sync the project in the IDE and create a new Java class in our freshly minted buildSrc project:

All that's left to do is to call the Fun.sayHello method from any build.gradle file. Let's create a simple hello task in the root project to try this out:

Reusing the code is nice, but all this doLast {} boilerplate when creating new tasks feels a bit iffy. With buildSrc we can remove this boilerplate by creating a custom task class instead. A custom Gradle task is simply a Java class that:

Let's refactor our previous Fun.sayHello method into such a task:

Using a custom task from our Gradle scripts is easy:

With a larger project it could happen that you end up defining tens of custom tasks with intricate dependency graphs. In this case it makes sense to create a custom plugin instead. That plugin creates all the tasks and wires them together.

Here's what a simple plugin adding our hello task would look like:

And now we can apply the custom plugin in our build file instead of creating a custom task:

We now have a working custom Gradle plugin that we can use from any of our subprojects. Of course, printing some text to the terminal is barely scratching the surface of what you can do with Gradle plugins. If you want to know more about writing plugins, I heartily recommend these talks from Gradle Summit 2017:

I used to work as a developer on JRebel for Android. It's a development tool that contains an IDE plugin, a Gradle plugin, an Android app and a normal Java SE app. To build these artifacts, we have a single large Gradle project consisting of 90+ subprojects. These share a lot of common dependencies, for example commons-io or slf4j-api. Writing compile 'org.slf4j:slf4j-api:1.7.25' over and over again quickly became a chore -- as well as a guessing game of what the correct version to use is.

The common way to manage these is to have an ext {} block in your root project. Refer to this Stack Overflow answer for an example. The downside of this approach is that you don't get proper autocompletion or code navigation.

We took a different route: defining our dependencies as plain old String constants in a Deps.java file inside buildSrc. This way we get full code completion and code navigation support right in the IDE! Here's an example of this trick for a really simple Android project:

And now we can reference these in our build.gradle files:

Get Started With Two Weeks of FREE JRebel

See what JRebel can do for your Java project with a free 14-day trial.