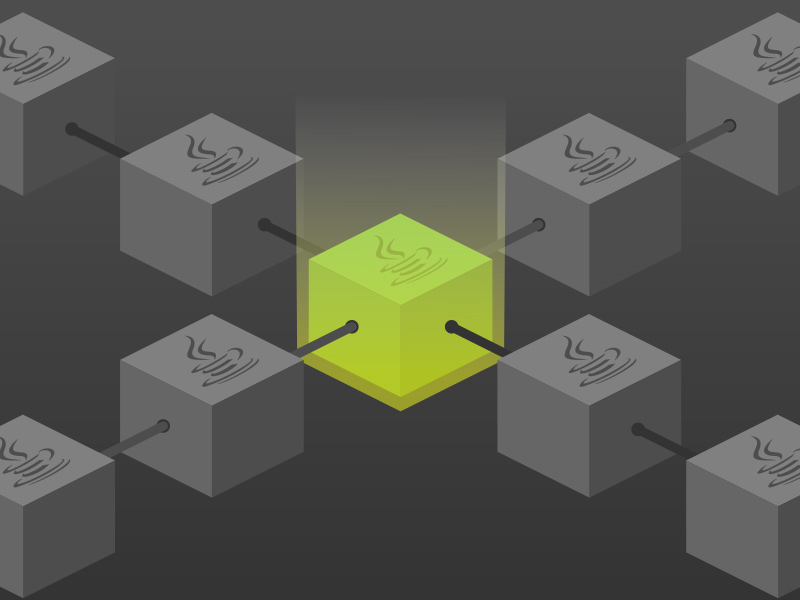 Picking the right Java framework is critical to long term success for a Java application. But finding one that both suits the application, and is extensible for future needs can be a challenge.

In this article, we’ll give an overview of the most popular Java frameworks today, including the best Java web frameworks, MVC frameworks, and cloud frameworks/platforms.

What Are Java Frameworks?

A Java framework is software that provides an extensible and standardized way to build and deploy applications. Depending on the framework, they may include tools, compilers, libraries, and APIs.

For the purposes of this article, we'll be breaking down Java frameworks into a few common use categories for application development:

It's important to note that each framework has strengths and weaknesses, and the frameworks we cover here today aren't necessarily the best fit for every project.

For Java web development, developers use a variety of different frameworks to suit the needs of their application. There are numerous Spring frameworks focused on creation of web applications, some of which we'll discuss in different sections in this article.

In this section, we'll look at the best Java web frameworks out there, Spring, GWT and JSF.

Spring offers a lightweight solution for developers who want to create web applications. With modules like Spring Security focused on authentication and authorization in Java applications, and Spring Session, focused on managing session information, the Spring framework is extensible and suitable for applications at enterprise scale.

The Google Web Toolkit, or GWT, helps developers to create Java applications with Javascript front-ends. It's open source, free, and includes Java API libraries, widgets, a compiler, and development server. GWT allows the underlying application to be object-oriented (since it's in Java), even if it's later compiled into Javascript. GWT has a steep learning curve, and because of that, and other options, isn't as well adopted as Spring.

JavaServer Faces are used to simplify the creation of web-based user interfaces. Used with Java EE and on enterprise scale web applications, JSF specifications use XML files to process events and create responses. For those on the cutting edge of open source, JakartaServer Faces provide the same benefits with Jakarta EE.

This may be a strange distinction to make, as many popular Java web frameworks already use the model-view-controller (MVC) pattern. But for this article, we wanted to look at the best Java MVC frameworks as a subset. So which Java frameworks are best for MVC-based applications?

Spring Web MVC is the original MVC implementation of the Spring framework. Because it's interface-based, it's highly customizable and because it avoids concrete inheritance and explicit dependencies, it's less-coupled, and easier to test.

Apache Struts is an open-source alternative to Spring MVC. But, unlike Spring MVC, Struts creates a more coupled MVC structure due to dependencies. Struts 2 introduced the interceptor API, making those dependencies less of a concern. Struts also has a history of security issues, so be sure to pay attention for updates if you use it. 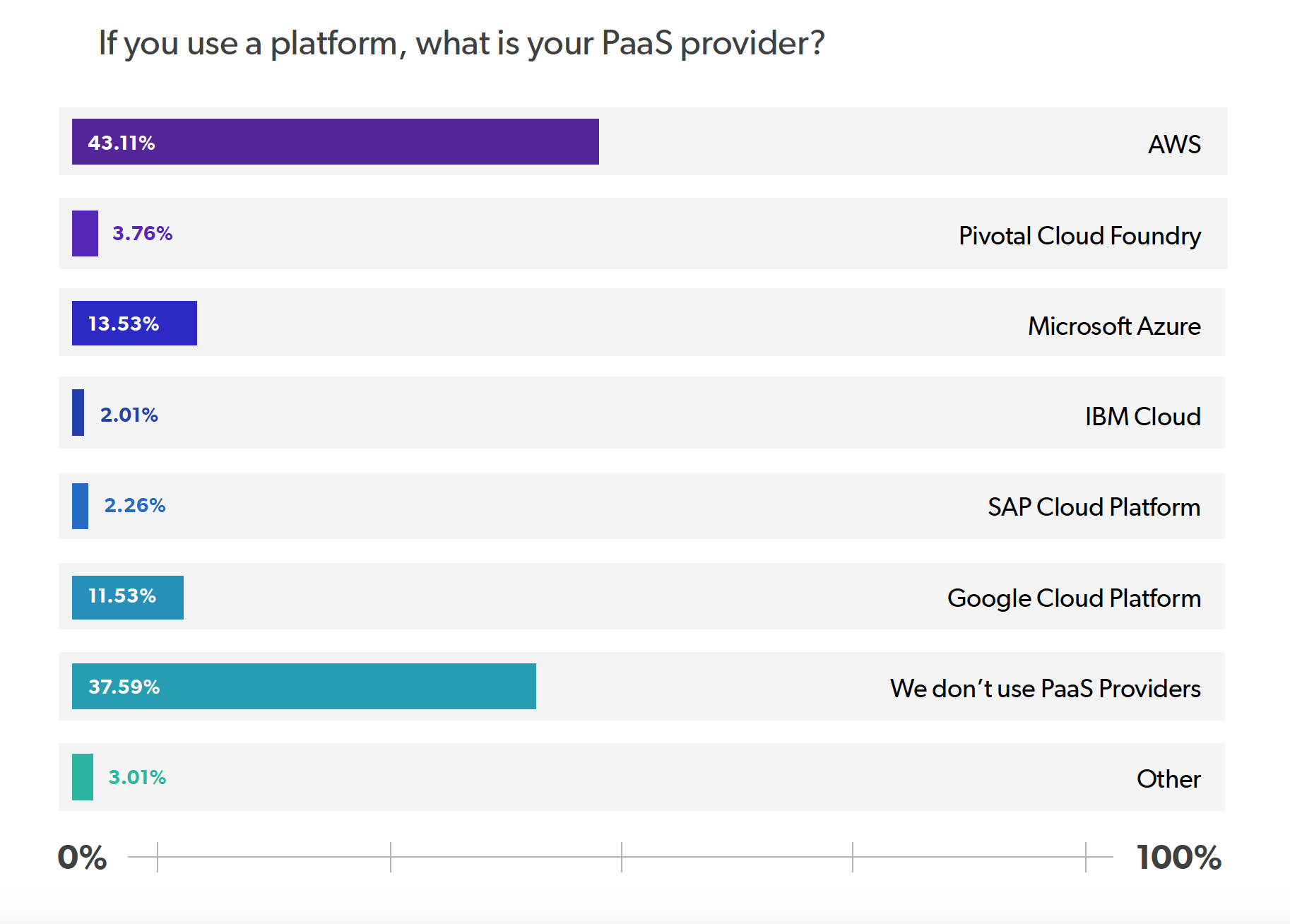 Although Spring Cloud, in its various versions, is arguably the most popular Java cloud framework, there are a few other cloud-native frameworks worth mentioning, including the relative newcomers in Micronaut and Quarkus.

While less known and used than Spring Cloud, Micronaut is quickly making a name for itself as a polyglot, full-stack framework that lends itself well to microservice and serverless applications. The primary benefit, when compared to Spring, is that it starts up fast, and doesn't consume as much memory for large codebases.

Quarkus was recently awared the 2020 Devies award for the best innovation in code frameworks and libraries -- which must mean they're doing something right. Like Micronaut, their application is tailored to GraalVM, and boasts low RSS memory -- making it perform much better than the typical cloud-native stack.

Java applications often need to communicate between relational databases and object-oriented databases utilized in MVC applications. And, as you can see by the results below, more than half of the Java developers we surveyed are working with persistence technologies like Hibernate or EclipseLink. 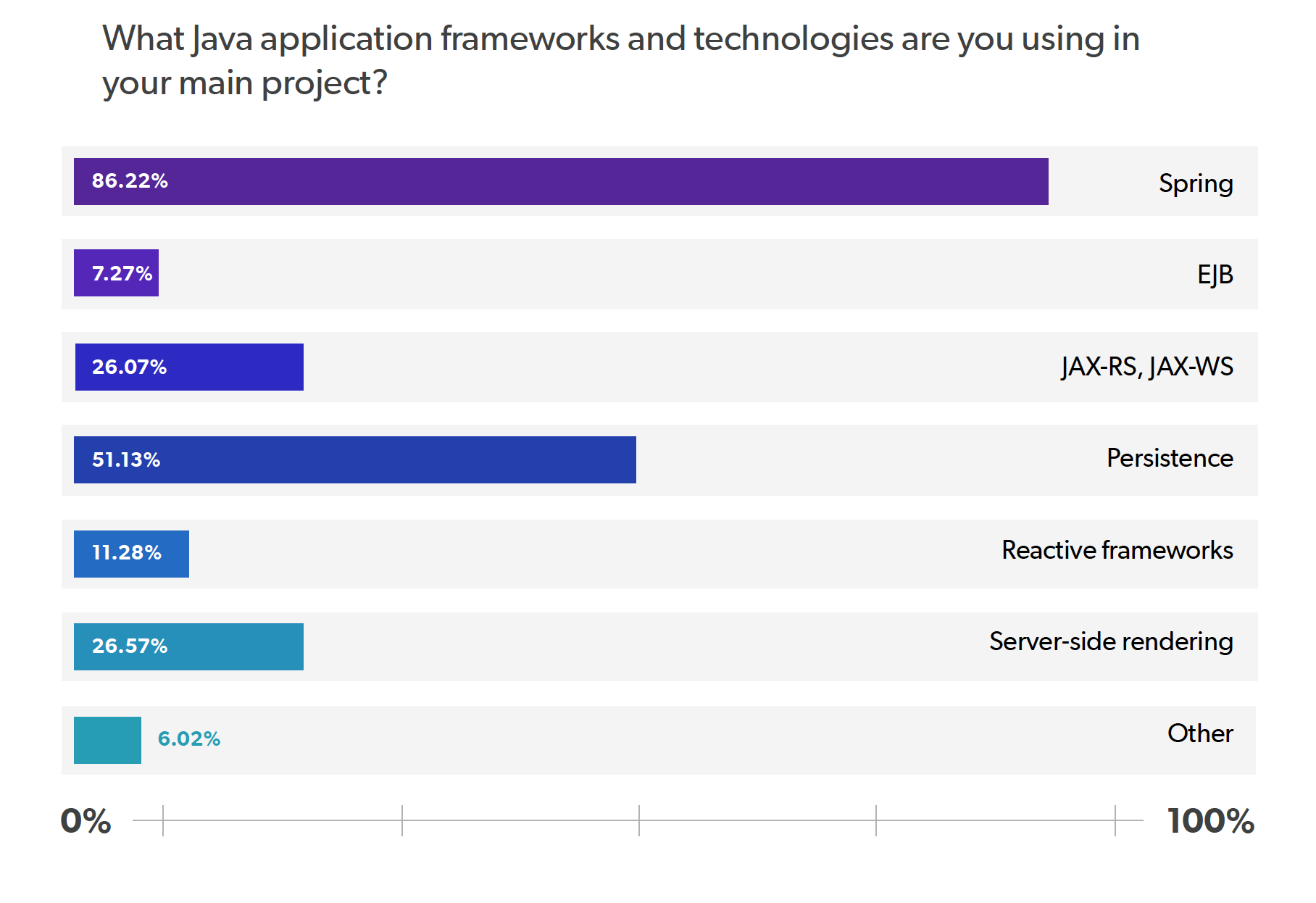 But what makes an ORM framework stand out? Let's take a closer look at a few of the best Java ORM Frameworks.

Hibernate is probably the most popular ORM framework on our list. As we've talked about in previous blogs, Hibernate has issues, but does a good job of interfacing incompatible databases and does it without making developers dabble too deeply in SQL. Though open-source, Hibernate is considered scalable -- making it a popular choice for enterprise scale applications.

When it comes to frameworks, Java developers have a wide selection of purpose-built frameworks to suit their needs. In this blog, we looked at the best Java frameworks for ORM, MVC, Cloud, and web-facing applications. In a future blog, we’ll look at the top testing frameworks for Java.

Did we miss a framework? Let us know on twitter at @JRebel_Java

Want to learn more about Java frameworks? The articles below may help:

Want to see how much time JRebel can save you based on the framework you use? Try our new JRebel ROI calculator! It lets you calculate potential time savings for you and your team in a few seconds.