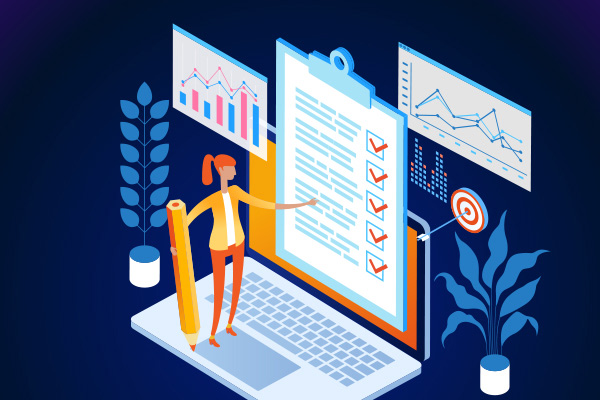 In this article, we'll give a basic overview of SQL, how it's used, and useful SQL shortcuts for developers. We'll also go over basic SQL queries, functions, joins, and subqueries. Then, at the end of the article, you can grab a copy of our handy SQL cheat sheet. But first, let's get started with some background information on SQL.

SQL is a domain-specific language used for database and stream management.

SQL (originally SEQUEL) was developed in the 1970's by Raymond Boyce and Donald Chamberlin, and has become one of the most popular database DSLs (domain specific language) in use. The open-source database implementation, MySQL, is available in both free and paid editions:

Chances are you're using either a relational database, where the data is organized into tables of entities, or a NoSQL database, where data is organized into key-value stores, document stores, column-oriented databases, or graph databases. In microservices applications, you're probably using both, so it's useful to know how to use both SQL and NoSQL.

To communicate to a relational database, you'll use the structured query language, SQL. SQL is a great language, designed to manage complex queries in a declarative form. When writing SQL, you will focus on the data you want to fetch, rather than how you want to fetch it. The commands in SQL are called queries and there are two main types of basic SQL queries:

In our MySQL query cheat sheet, we'll mostly look at the data manipulation queries and try to explain how you want to use them.

When you think of your data in a relational database, you should think in terms of set theory—you have the description of the entities in a multidimensional space, where the columns in the tables correspond to the dimensions and the rows in the tables are the data points in that space.

When you use the SELECT query, you essentially specify the projection of the data point onto a certain multidimensional space: which dimensions to include in the projection is set by the query. Below is the typical example of an SQL SELECT query:

You tell the database which columns from which tables you want. Then you restrict which data points to include in this projection. That is done with the WHERE clause. The rows that do not satisfy the conditions you write in the WHERE clause are omitted from the result set.

On top of that, you can group the related rows using the GROUP BY clause. For example, you can aggregate the rows that belong to the same type, like the employees of the department. You can enhance your SELECT statements with additional modifiers, for example, asking for DISTINCT entries will return you a results set with unique rows. And there are several very useful predicates you can use in a WHERE clause. The most frequently used ones are:

Now we’ve covered the basics of retrieving data, the following commands will help you update the entries in your tables and create new rows. To update a table, you use the UPDATE statement, and specify which columns you assign new values to.

This is pretty straightforward, just don't forget to limit the values you want to update. If you don't specify the WHERE clause, you will update all the rows in the table and that is probably not what you wanted to achieve.

Additionally, you can update the values dynamically using the data fetched by a SELECT. However, we omitted that from the SQL cheat sheet PDF because it’s not a use case you typically find on the application side of the project.

To add new data into the tables, you’ll need to use the INSERT statement. Its syntax is also pretty understandable from looking at the command. You just need to specify the data and map which values you want to assign to which columns in the table. Or you can batch insert the values that are returned by a SELECT query.

Armed with UPDATEs and INSERTs you are pretty dangerous to any database now, so don't forget to limit the update range with a WHERE clause. Moreover, typically, writing into a database requires a transaction, so if you start one and execute an UPDATE, review the results and commit the transaction.

When you master simple queries, you're ready to make the database a really powerful ally. To do so, you need to fetch the data from several tables at the same time, relating the entries from one table to the corresponding rows in another. This is where you'd use a JOIN. A JOIN clause is a part of a SELECT statement; it allows you to specify multiple tables for data retrieval.

The syntax of a JOIN query is the following:

You just specify the tables to join and based on which columns to find what rows correspond to each other. There are several types of JOINs, but here are three most frequently used.

When you don't know how to JOIN the tables correctly, you can use subqueries instead. A subquery is a SELECT query specified in the body of another:

Subqueries work best when combined with the IN clause in the outer select. Typically you'll fetch the ids that correspond to the entries you want in the subquery and process them on the outer level. Besides just fetching the data, JOINs can make updating your data easier. Indeed, you can use the JOIN clause in the UPDATE query and filter which entries to update based on the data in the joined tables.

Even despite the restrictions (like you can only update one table this way, not both, and that the rows have to be unambiguously identifiable for this to work) this approach is quite useful to know about. Also, make sure to check if your database supports a special syntax for using joins in the update statements, as it will likely improve your performance.

There is one more thing, on top of querying the values that sit in the database, you can specify the functions that will transform those values into something more useful. There are quite a few of these, and you can write your own utility functions. However, here's a taste of what you can expect from any database.

On top on that, you can use the set operations on the returned results. You can use UNION to append the results of one query to another:

The UNION operation will not allow the duplicates, UNION ALL would append all the results even if there are duplicate rows. There is also the EXCEPT operation which will return the difference between the result sets and INTERSECT for finding the intersections of the results.

Download and print out this SQL cheat sheet so you can use it whenever you need it. To get full the explanations and details of the content in the SQL cheat sheet, continue reading this blog post! 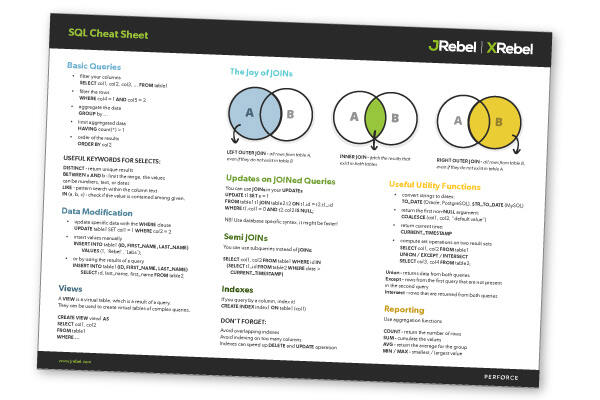 We've talked a lot about the basic SQL commands, including how different joins work and when to substitute them with a subquery. We also looked at a number of useful utility functions and how to perform set operations on the results of your queries. If you're looking for additional Java cheat sheets, be sure to check out our Java cheat sheet collection.

Note: This post was originally published on June 29, 2016 and has been updated for accuracy and comprehensiveness.