You can download XRebel 2021.3.1, or view the changelog, by selecting an option below.

For a full list of support, fixes, and improvements, please visit the XRebel changelog.

You can download XRebel 2021.3.0, or view the changelog, by selecting an option below.

XRebel 2021.3.0 now supports Java 16 and MongoDB 4. The sticky header now has a new style and the active IO filter status is clearer.

XRebel 2021.3.0 also introduces a handful of bug fixes, and a few nice usability improvements that make the XRebel experience better. Fixes include resolving the bug that caused miscalculation of IO events and that caused the session tab to be empty.

XRebel 2021.2.0 is now available for download. This new version introduces a time savings calculator built-in to the tool.

You can download XRebel 2021.2.0, or view the changelog, by selecting an option below.

XRebel 2021.2.0 also introduces a handful of bug fixes, and a few nice usability improvements that make the XRebel experience better. Fixes include the HttpServerResponseImplCBP error with Vert.x and the right side of tour no longer notifying user in the last step, when the bottom menu does not appear.

XRebel 2021.1.1 is now available for download. This new version introduces a new "open in standalone mode" button along with improved feedback in each view and a tutorial step for feedback.

You can download XRebel 2021.1.0, or view the changelog, by selecting an option below.

XRebel introduces a handful of bug fixes, and a few nice usability improvements that make the XRebel experience better. These include improving UI when the toolbar is enabled and the addition of visible request and response information when end-to-end monitoring is not enabled.

XRebel 2020.3.1 introduces a number of new features and integrations, including an onboarding tour that makes it easier for new and experienced users to explore the latest XRebel features.

You can download XRebel 2020.3.1, or view the changelog, by selecting an option below.

One of the more exciting features in XRebel 2020.3.1 is the new XRebel tour. It walks through all the features XRebel has to offer in a demo environment.

XRebel introduces a handful of bug fixes, and a few nice usability improvements that make the XRebel experience better. These include a Javaassist exception in Hibernate, and UI issues that relate to horizontal scroll while using XRebel.

XRebel 2020.2.0 is now available! This release introduces numerous bug fixes, features, and improvements that make XRebel more effective for developers. Please download the latest version, or view the full changelog by clicking the buttons below.

XRebel 2020.2.2 marks major improvements in both user experience and functionality. With a number of features that allow developers to do more with the plugin, added support for hibernate, and the new Eclipse plugin integration with JRebel, there are plenty of new features to love.

The JRebel plugin for the Eclipse IDE now features a native XRebel integration. Enjoy all the benefits of XRebel while using JRebel in Eclipse, and toggle use of JRebel and XRebel at will.

XRebel 2020.2.0 adds support for Hibernate 5.0, making it much easier for developers to trace and assess database queries in Hibernate ORM.

Other Improvements and Bux Fixes

This latest version also introduces improvements to UX and performance, with improved comparison in CPU view and faster Diff load time. Bug fixes included in the update target a handful of UI issues and user-reported bugs.

XRebel 2020.1.1 is now available for download! This release is user-focused, with two new features designed to make life easier for XRebel users. You can download XRebel 2020.1.1 by clicking the button below.

This latest version introduces two new features; a moveable toolbar, which lets users place the XRebel toolbar where desired, and simplified remote licensing, which makes XRebel configuration for microservices, containers, and remote servers a much easier — and faster — process for developers.

The XRebel toolbar is now moveable! This UX feature fixes a common complaint from developers and offers increased ease-of-use for XRebel users. If XRebel is blocking your view of critical browser information, simply click the top right corner of the XRebel banner and position it in a more convenient location.

XRebel now supports viewing more in-depth details in your trace view. This means that XRebel users will now be able to get the exact amount of time it takes for a method to be processed. With XRebel 2020.1.1, you will be able to immediately see this in the trace view whenever you make a request.

XRebel 2020.1.1 introduces the ability to configure your licenses through JVM arguments – which means users can now configure XRebel on remote servers, microservices, and containers faster than ever.

Looking for the full XRebel 2020.1.1. changelog? You can view the current XRebel version changelog by clicking the link.

In Case You Missed It

You can read more about these new XRebel 2020.1.0 features by clicking the release link on the sidebar.

With XRebel 2020.1.0, we're introducing dedicated support for JDK's CompletableFuture API! This is a big step toward making XRebel the go-to tracing tool for reactive programming in Java.

This feature plugs smoothly into the existing XRebel trace tree: CompletableFuture tasks are indicated by the icon.

CompletableFuture support takes advantage of the reactive programming support XRebel already has. Any work that is parallelized into a separate thread is indicated by the fork point icon . This will help you understand how your CompletableFuture tasks actually map to threads. 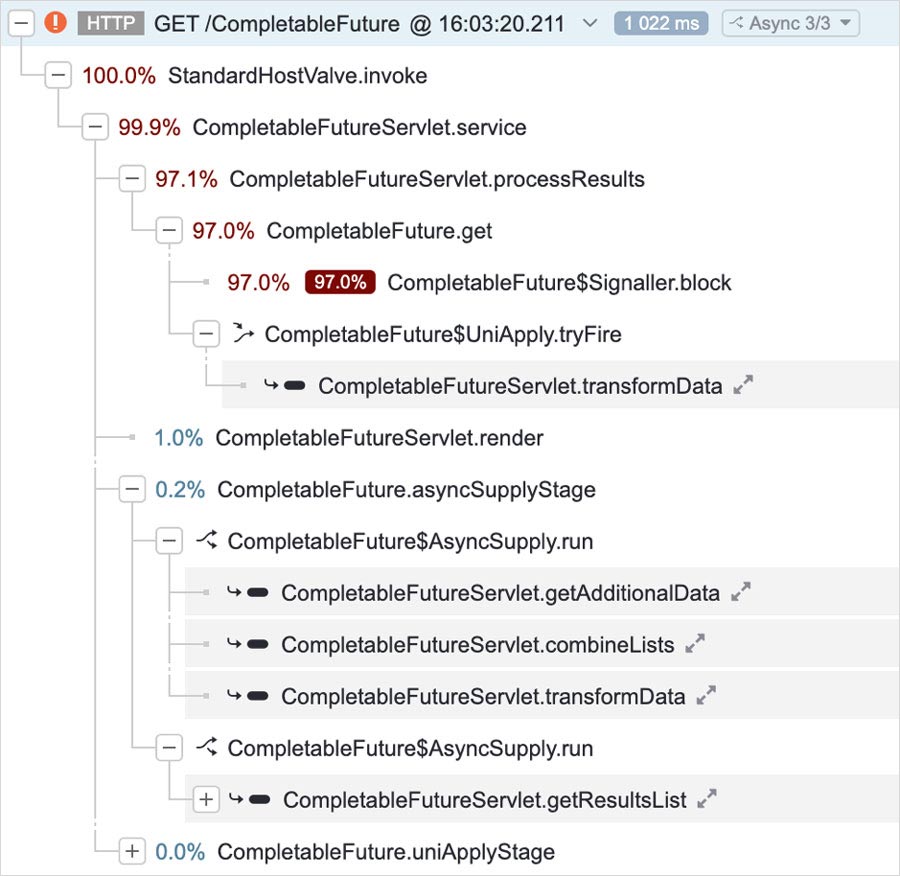 We are especially proud of the new Gantt chart view, which helps you drill down into CompletableFuture tasks and their interdependencies.

The Gantt chart view displays all CompletableFuture tasks from the current request as a timeline — with the X-axis representing time since the beginning of the current request. Each task is then represented as a bar, making it easy to determine the timing and duration of a given task.

The connectors help to visualize inter-task dependencies. For example, some tasks depend on the completion of a number of other tasks (e.g. thenCombine), but other tasks might require completion of just one of their parents (e.g. acceptEither). The Gantt chart view visualizes this distinction, making it easy to trace the "critical path" (i.e. which asynchronous calls affected the overall request time) through the graph of asynchronous operations.