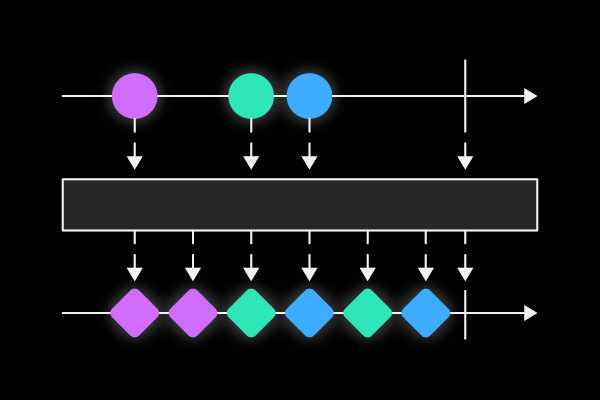 RxJava Cheat Sheet, With a Pinch of Android

Today we're talking about RxJava, the library that implements the ideas of the reactive extensions, which is a library for composing asynchronous and event-based programs using observable sequences. Along the way, we look at basic RxJava classes, observables, data processing functions, before ending with a link to our one-page RxJava cheat sheet PDF.

RxJava is an implementation of the reactive extensions, a library for composing asynchronous and event-based programs using observable sequences.

As such, RxJava offers the implementations of the abstractions to create streams of events and items that you can subscribe to, in your code and react to the data flowing through those streams. Note, these are different from the streams you may be familiar with in the Java 8 Streams API.

Here are the basic RxJava classes you should know about:

There are more classes in the API you need to know, but these are responsible for creating the streams and producing the data. On the other side, data is processed via Observers. We'll talk about them in a moment.

Most of the time in a system, you'll have some way to get the observables from the API. Here's how you can create an observable from a value, just call the just method. There's also a way to create an Observable from a collection, then it'll emit all the items in the collection one by one and the observers will have a chance to process them.

The attentive reader might have nodded knowingly at our third example in the snippet above. The one where you can create an Observable from a callable. This comes really handy when you're building an asynchronous API.

Now we have the building blocks to create reactive streams of data. The missing piece is processing the data that flows through them. This is exactly what Observers allow you to do. Observers provide a mechanism for receiving data and notifications from Observables using the following API:

To subscribe to the observables you just implement the Observer interface, put your business logic into the onNext method while using the other two manage the lifecycle notifications from the observable.

Publishing to Multiple Observers in RxJava

Sometimes, you want to have more than a single observer being notified of the items emitted from an observable. Imagine for example that you're building a UI and need to process user actions. You might want to, for example, log the action, start a computation or change the UI to convey that an operation is in progress. All these actions are independent and it'd be smart not to mix them up with business logic. So you'd want multiple observers to receive an item saying something happened, so the logger would log, the UI updater would update the UI, and so one.

Luckily, there's a way to do that. You're need to use publish() to subscribe multiple Observers to an Observable. After that the observavle would be able to receive multiple observers and in fact it won't emit any items until you call the connect method. Then it'll start notifying all the observers of the items.

You can also use the autoConnect(int) method to say how many observers you're going to connect, then you don't need to call the connect method manually and the items will flow automatically when all the observers are attached.

Want to see what tools Java developers are using in 2020? Check out our latest Java Productivity Report! You can watch a breakdown of the results via the video below, or download the full, free report by clicking here.

In this section we look at the most frequently used functions used process the data flowing through the observables. In a nutshell, by applying these on an observable you'll get another observable which you can subscribe to.

You can recognize some of these from the Java 8 Stream API since most stream processing libraries have the basic functions that are very similar.

RxJava documentation comes with the marble diagrams -- pictures that illustrate what happens with the data when you apply a function. They look amazing and are quite intuitive. In the cheat sheet we illustrated the flatmap behavior with a marble diagram:

A great thing about RxJava is that it's production ready and developer friendly. For example they have a way to test the observables and the data transformation functions you use.

Here's a basic example of using a TestSubscriber to check if the range function creates an observable that emits N items.

Next, let's look at some of the libraries that can help you use RxJava on Android. One reason we're interested in using RxJava on Android is because ZeroTurnaround develops JRebel for Android, an Android Studio plugin to skip the build and install cycle when developing, and just reload your Android application code right in the device or meulator on the fly.

One problem with RxJava on the Android platform is the complicated lifecycle of the Android framework components. Activities and fragments can come and go as the framework pleases, and that means you always have to be sure you clean up all the resources that you attached to them. In the Rx world, it's a bit more complicated, since you don't build the graph of objects in the normal way, but you attach the data processing functions in the reverse order. So either you always cancel the subscriptions manually or use something like the RxLifecycle library.

Just compose your observable and call one static method from the library, it doesn't get much easier. There's also a more verbose API to manually specify when to cancel the subscription, but for most cases you're good with the default one.

One very Android specific use case for RxJava is managing UI events and actions with Observables. To simplify doing it, RxBinding offers a API to unify all the UI event handlers.

You can use the RxView class to turn UI events into RxJava observables:

And it'll work the same way for all the UI elements: buttons, text views, and so on.

Another thing you should be careful of when developing Android apps is on which thread do you process the data. You cannot do any long running computations on the UI thread, as it'll render the UI unresponsive. So you want your observers to operate on background threads. To make it seamless, use RxAndoid library, with which you can easily control on which threads you subscribe to observables.

In the snippet above we’re observing the events on the main Android looper thread, and the subscription actions will be executed on the new background thread. The library offers more customizations, but for the most part, the defaults will work nicely.

Whenever you use RxJava, you'll use Observables, Observers and transform the data, and this cheat sheet can be a great reminder of the most frequently used parts of Rx Java.

Download and print out this cheat sheet so you can use it whenever you need. To get fuller explanations and more detailed content in the cheat sheet, continue reading this blog post! 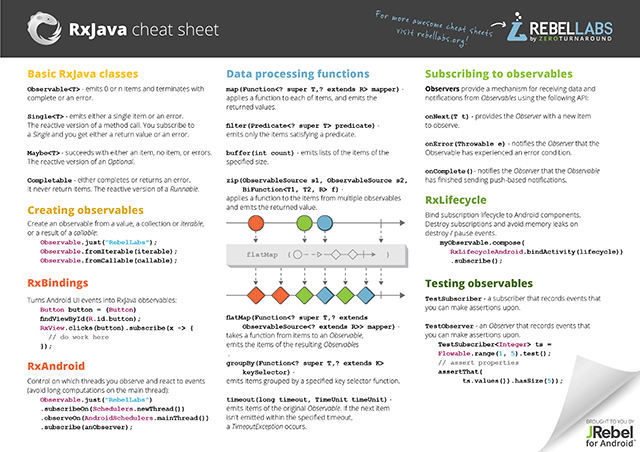 Get The Cheat Sheet

Ever since Anton wrote a post about RxJava, I wanted to create an RxJava cheat sheet. With RxJava API, data processing functions, some lesser known tricks and utilities, we have the perfect mix for a great cheat sheet -- trust me, we've done a bunch of them. Here's a selection of our most popular ones:

And many more. You can see all of them on our cheat sheets page.

Want to Save Time During Development?

JRebel can help developers skip redeploys and instantly see changes to code. Want to try it on your project? Click the link below to learn more about our free JRebel trial.